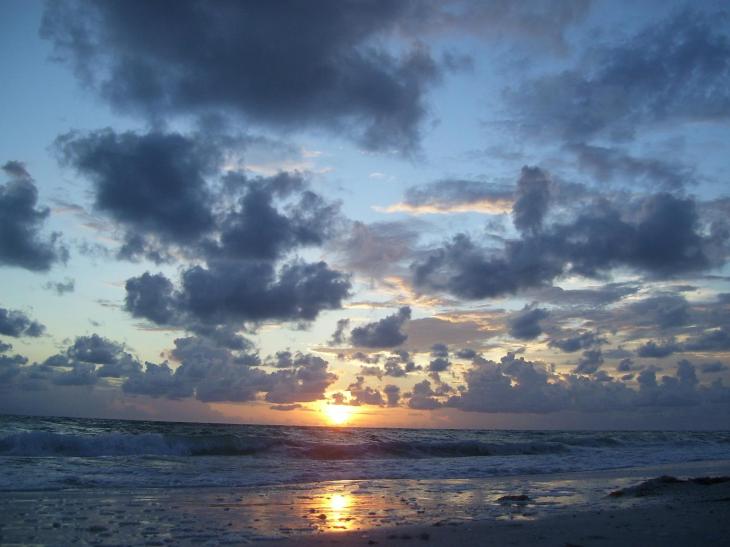 You are looking at my favorite Florida sunset picture out of all the ones I have taken. While I love the beauty of Florida I have discovered as I travel around, that Florida is not the only beautiful place in the world. The sunsets on the sea are not the only way God expresses His beauty. He also expresses His beauty on snow capped mountains, lush valleys and meadows as well as majestic forests. God has too much glory and beauty for little Florida to contain, so He must spread it all over the world. It is the same with people. God is just too big and glorious for Him to portray Himself in one type of people. So He expresses His beauty in different types of people all over the world.

The spring of 2003 found me driving from Texas to Tennessee. I stopped for the night in Louisiana. The next morning I stopped at a doughnut shop in Mississippi. As I walked in, all eyes were glued to me, and were staring me down. I checked my zipper. Everything seemed to be okay. I walked up to the counter and smiled at the lady at the cash register, but she only glared back at me. I wiped my face. I must not have rinsed well after shaving. I cheerfully ordered my two chocolate cream filled doughnuts. My cheerful order was not met with a cheerful smile. The lady very curtly gave me my doughnuts, made change and glared at me as I smiled back and said “Thank you!”

As I turned around, I saw all the customers were still glaring at me. I smiled back at them and they only glared back at me. That is when I finally noticed something I hadn’t before. I was the only white person in the store. Everyone else was black. My first reaction to that realization was, “You’ve got to be kidding me! Your attitude towards me is so 1964! It’s 2003 people!” I came within an eyelash of making a grand speech, about how we are all friends back in Texas, but thought better of it. My church in Texas was a multi-cultural church with several different nationalities. (Notice I did not say races and I will tell you later why.) Not only at church, but also where I worked, I had black friends, white friends, Hispanic friends, and everything in between.

Later when I shared my experience with a friend, they reminded me that I was passing through an area where there was still anger over racist crimes. They reminded me about Emmett Till, the young black boy who was killed by some white men for no good reason and the jury let them go! That has created a lot of anger in the black people.

Well I want to share something with you. What happened to Emmett Till has created a lot of anger in me too! You see, I don’t think of Emmett as just black. I think of him as human. I like to think of myself as human as well. People call what happened to him a race crime, that pits blacks against whites. But here is the thing. I am the same race as Emmett Till! While he was black and I am white I am still the same race as him- the human race! What happened to Emmett was a crime against humanity-the same humanity I am a part of. I have just as much right to share the hurt and anger of this terrible crime, because as a human I can identify with him. You see, the Bible only acknowledges one race, the human race. We all have one Father. When Cain killed Abel, it was an attack on the human race and when those men killed poor Emmett, it was an attack on the human race as well- the entire human race, and it broke the heart of the same Father whose heart was broken when Cain killed Abel.

Even though I enjoy beautiful sunsets on the beach here in Florida, I am still concerned about how pollution affects beautiful places all over the world. You see I don’t just belong to Florida. I belong to the world. Emmett Till did not just belong to black people. He belonged to humanity.

When we become narrow-minded, thinking we only belong to people in our own area, color, or even church then we are denying how great and wonderful our God is. Even in the church we debate theology thinking our way of thinking has a corner on the market, forgetting that God is too great to pour all His theology into one simple narrow minded brain. I have said it before and will repeat it now, often our camp of thought is wrong, not by what it teaches, but by what it does not teach. Some people stress justification while others stress sanctification. Fact is you need both. So to get the big picture on theology we must put all our ideas together. I may love my beach sunset pictures, but we need beautiful mountains and valleys in there as well. While I see God’s glory in the sea, many see God’s glory in the desert. My sunset picture is not a complete comprehensive picture of God’s glory and beauty, and my theology is not complete either. When we put all our pictures together we get the big picture.

Luke 15:11-31 shares the story of the prodigal son, and in that story the older brother disowns his younger brother when he calls him “This son of yours”. He would not call him brother. Problem is we all have one Father. That makes us all family. God is the father of struggling sinners. If in my pride I claim the struggling sinner is not my brother, then I have also said God is not my Father! In the end of the story the older brother finds himself outside of his Father’s house, because he refused to accept his brother.

Quaid, an elderly man from Vietnam, whose family disowned him when He became a Seventh-day Adventist, was a member of a church I preach at here in Florida. Sadly, he has passed on. At his funeral, a mother of a struggling teen shared this story with me. Her daughter, we will call Shelby was dealing with some grief in her life and was acting out. She dressed differently and liked to dye her hair bright colors. One day at church people were talking about her and she was very hurt. She started telling everyone she was never coming back, because people were treating her like she was so different. Quaid, in his classic grey suit and tie sat down on a bench outside the church, with 15 year old Shelby, in her strange clothes and hair, and he told her how his family had thought he was strange for being Seventh-day Adventist, but it did not stop him from coming to church. He talked to her about how people thought he was strange because of some of his customs from his native country, but that did not stop him from loving them. This elderly man from Vietnam, sat on a bench with a rebellious 15 year old girl, and talked to her about all the things they had in common! He shared with her how, while being different, they both shared the same problems-rejection. He told her he was not giving up coming to church just because people thought he was different, and told her not to let them keep her from church either! Years later, Shelby attends church occasionally, but according to her mother, she would not be attending at all if it wasn’t for an elderly Vietnamese, traditional Adventist elder who saw himself in a 15 year old American rebellious teenage girl. Shelby attends that church occasionally and has friends from that church that she meets for socials outside of church, but Quaid will always have a special place in her heart.

Friends we share one Father. We are family. While I live in Florida I have an interest in the whole world because the lines between states and countries are only imaginary. I am not just a part of Florida. I am a part of this world. I am not just a Seventh-day Adventist. I am a Christian and therefore I have an interest in my Methodist and Baptist brothers as well. I don’t just belong to white people. I belong to people of every color and nationality because I am a part of the human race. I am a part of God’s great big family. I am not going to let narrow minded thinking force me outside my Father’s house.

You can study this week’s Sabbath School lesson here.