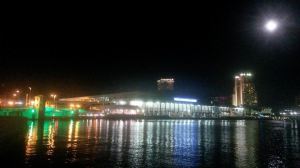 Years ago Brett Favre, a famous American football quarterback said in a commercial,

“the history books won’t record me as a quarterback, but as a football player.”

As well as setting all kinds of passing records as a quarterback, Favre also was not afraid to block or even make tackles if the other team got the ball. While the quarterback position is considered a glamorous position, Favre was eager to work just like everyone else to win. He did not let his position define who he was. He let his hard work define him. When I saw that commercial I remember thinking to myself, I don’t want to be remembered as a Bible Worker or lay pastor. I want to be remembered as a Christian.

Jesus received His authority by his behavior and not by any title. Jesus was willing to work as a Servant to help others become winners.

But Jesus called them to Himself and said to them, “You know that those who are considered rulers over the Gentiles lord it over them, and their great ones exercise authority over them. Yet it shall not be so among you; but whoever desires to become great among you shall be your servant. And whoever of you desires to be first shall be slave of all. For even the Son of Man did not come to be served, but to serve, and to give His life a ransom for many.” Mark 10:42-45 NKJV

While Jesus had not titles or glamorous positions neither did Enoch. Yet God took Him to heaven not because He was a high priest. He wasn’t. He wasn’t a king either. He was not the head elder at church or Bible Worker or pastor. Enoch was known for one thing. And that one thing is why He went to heaven without ever seeing death.

And Enoch walked with God; and he was not, for God took him. Genesis 5:24 NKJV

God’s messengers must tarry long with Him, if they would have success in their work. The story is told of an old Lancashire woman who was listening to the reasons that her neighbors gave for their minister’s success. They spoke of his gifts, of his style of address, of his manners. “Nay,” said the old woman, “I will tell you what it is. Your man is very thick with the Almighty.”

No matter what your talents, gifts or positions or titles are, your success comes from being “very thick with the Almighty.” Your entrance into heaven will be because you walked with God.

No one was ever taken to heaven for being a king or priest, pastor or elder. God takes those who walk with Him.