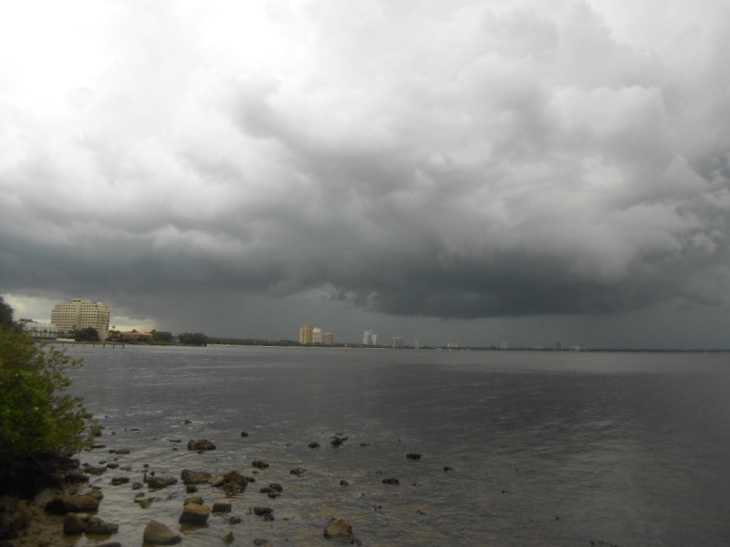 I am writing today from the beautiful but sometimes stormy Tampa Bay area.

Jesus was sleeping at the back of the boat with his head on a cushion. The disciples woke him up, shouting, “Teacher, don’t you care that we’re going to drown?” When Jesus woke up, he rebuked the wind and said to the waves, “Silence! Be still!” Suddenly the wind stopped, and there was a great calm. Then he asked them, “Why are you afraid? Do you still have no faith?” Mark 4:38-40 NLT

Besides Jesus and Jonah, I don’t know of too many people who take naps on boats during chaotic storms. I think I would be freaking out like the disciples. 18 year old Ellen Harmon found herself in the middle of storm on a steamboat in the north Atlantic. The boat rocked and tossed one lady out of her bed. Another lady screamed in terror, before asking Ellen if she was not terrified as well.

I told her I had made Christ my refuge, and if my work was done, I might as well lie in the bottom of the ocean as in any other place; but if my work was not done, all the waters of the ocean could not drown me. My trust was in God, that he would bring us safe to land if it was for his glory. –Ellen White, Testimonies for the Church,  Volume 1, Page 81.

Young Ellen could have been terrified like the disciples were during their storm, but instead she rested her faith in the love of Jesus. She was not afraid. She had faith that God would be what was best.

One day, while helping out at the church school where I give Bible studies, I was sharing the story of Jesus calming the storm. When I got to the end of the story where the water was all calm and peaceful, a third-grade boy raised his hand and asked, “How is the boat going to get anywhere now?” He was pointing out the obvious, that wind and waves are what carry a sail boat. Without any wind you can’t get anywhere! (We’re talking about boats in Jesus’ day.)

It was persecution that got the church to move and spread out, sharing the gospel around the world. Many people have been “forced” to pursue their dream careers after losing their mundane but “secure” jobs. Once, while riding my bicycle, I got caught in a torrential downpour. I put my cell phone in my pocket, but that was not enough. When I took it to the repair shop, because it quit working, water gushed out when they opened it up. However, they told me I was eligible for a free upgrade. I walked out of the store with a much nicer and newer phone, with nothing out of my pocket, thanks to the storm. A very simple illustration of how a storm got me to a better place, as I don’t have space to tell of bigger blessings from even greater storms.

At the end of the storm Jesus asked the disciples why they were afraid and had no faith. I always assumed He meant why they had no faith He could calm the storm, but fact is, that is exactly what they were asking Him to do. Maybe He was asking them why they needed Him to calm the storm? While some storms are scarier than others is it possible they all get us to where we need to be? Will we really get anywhere in life if Jesus calms every storm that comes our way? Are there times we should let the storm rage, and do like 18 year old Ellen, and rest our faith in Jesus, just like Jesus was resting in His Father’s love during His storm? (Don’t ask me why Jonah was resting during his storm-I have no idea!)  Sometimes it takes more faith to not ask for a miracle. With God’s love we can face the roughest storms and not be afraid. That’s what 18 year old Ellen Harmon did. I firmly believe, if Ellen Harmon had been in the boat during the storm with Jesus and the disciples, she would have been resting with Jesus, unafraid and full of faith in God’s love amidst the tremendous waves, instead of freaking out with the disciples.