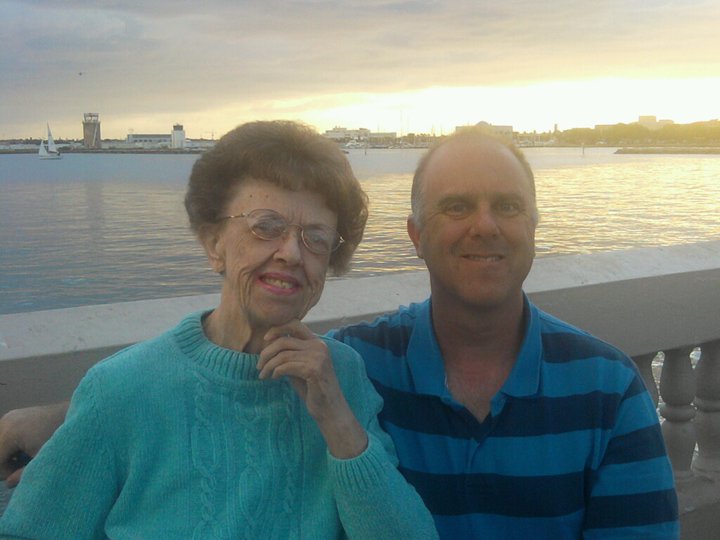 I am writing tonight from the beautiful Tampa Bay area about my beautiful mother.

Rachmaninoff Piano Concerto #2 is my favorite classical piece. I have a CD of Rachmaninoff performing the piece himself, that I randomly picked up at an estate sale in 2006. The pop song “All by Myself” by Eric Carmen borrows a section of the much older arrangement.

So I was very excited when I heard that the Florida Orchestra would be performing this selection in February of 2012. I made plans with a friend to get tickets. My mother told me she and dad would be coming down from Oklahoma, to visit at the same time. Mom was diagnosed with cancer in 2004, and was given two or three years to live if she had treatment. She refused chemo and was still with us 8 years later. In 2010 she fell and broke her hip, and then broke it again during a later surgery. She was frail now and had to use a walker. I told mom about the concert and she said her and dad would like to go with us.

I went to the ticket office and bought the cheap seats in the back like always. Concerts sound the same from any distance, so why pay more? I usually got tickets for Ruth Eckerd hall in Clearwater. This time I got tickets to the Mahaffey Theater in St. Petersburg, right on the bay. I also prepaid for special parking that was supposed to be close to the entrance.

That night we arrived and the place was packed. The convenient parking I had arranged for was already taken. I think the parking attendants were a little overwhelmed. I got mother as close as I could, but we were still at least 100 yards from the door. Poor mother made it with us to the door. We showed the ticket taker our tickets. She looked at our tickets and looked at mom with her walker.  “To get to these seats you will have to climb about 20 steps,” she said. When I bought the tickets I did not realize I had bought tickets for the upper level, with steps to climb. Remember I usually got to Ruth Eckerd Hall, which is all one level, unlike the Mahaffey. The ticket lady told us the concert was sold out and all the handicapped seating was taken.

I felt terrible. What I thought was going to be a very special night was ruined. However, mother was not going to be denied attending the concert with me! The guide showed us to the elevator to the upper lever, but mother still had to climb at least 20 steps to get to our seats. (Maybe more. I honestly can’t remember exactly how many but it was a lot!) My mother was so thin and light that I actually wanted to pick her up and carry her up the steps. Mom, with her walker and help from dad and me started her climb up the steps. Some people already seated looked at us horrified, wondering why we were putting this poor old lady to torture. Some looked very concerned, and I am sure now, if they had known how far up were were climbing, they would have changed seats with us. Maybe I should have asked, but I was bamboozled by the chain of events and was very frustrated with myself for not being more careful selecting tickets. Of course the parking was not my fault. It did not turn out as I had arranged. I was very frustrated with the whole evening.

Mom made it to the top with her walker and our help, and enjoyed the rest of the concert. She never complained. Instead she bragged to her older sister later, about how well she climbed all those steps.

Now that mom will soon be gone for 2 years now, I look back on that disastrous night as one of the most beautiful evenings we had. What was more beautiful than the young woman on the piano that night melting our ears and hearts as she tickled the ivories, was my 76 year old cancer stricken mother, with a bad hip and walker, marching across the parking lot and up 20 or more steps to watch the concert with me! What she went through to spend the evening with me melts my heart.

Mother showed me that night at the concert how much she loved me, and what she was willing to endure to spend time with me. A love I will never take for granted, and a love I want to emulate. I thought the night would be about a beautiful classical music performance, but it was really about the performance of my beautiful classic mother. Mother has been gone for two mother’s days now. But until we meet again, I hope to love others the way she showed me how to love.