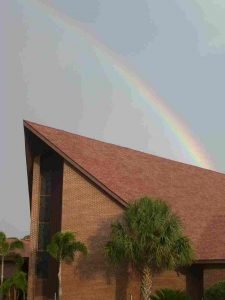 As a matter of fact the Sabbath is a sign that we are resting our faith in Jesus’ grace and not our works. God explicitly set aside that day as a sign of His covenant with His people – a sign that He sanctifies His people, in contrast to attempted sanctification by works. That’s why I find it ironic when people accuse me of trying to get to heaven by my own works by keeping the Sabbath.

The radio preacher was correct that the Sabbath pointed us to the rest we have in Christ. However, he apparently did not realize that the Sabbath is also a sign of God’s New Covenant in which He promises to write His law within our hearts:

Some other things we need to consider:

While the feast days and ceremonial Sabbaths, such as the Passover, were not instituted until sin came into the world, we have the weekly Sabbath made holy (sanctified) before there was sin and the need of a Savior. Paul says in Colossians 2:16-17 that the ceremonial feast Sabbaths were done away with at the cross. 2. Some people say we should still keep the feast days. They don’t seem to realize that we are literally living in what the feast days symbolized! We no longer need a ceremonial Passover because Jesus dying on the cross was the real Passover to which all the other Passovers pointed. We no longer keep the ceremonial Day of Atonement because, beginning in 1844 we are living in the real Day of Atonement. So those feast days that point us to the cross are done away with, but the Bible nowhere indicates that the weekly Sabbath was a “shadow of things to come.” The weekly Sabbath was there before our need of the cross, and the Bible tells us that it will still be there after the cross.

I have heard people argue that the only reason Paul was at the synagogue on Sabbath was because that’s the only day he could meet the Jews there to talk about Jesus. However, we just saw in Acts 18:4 that in the New Testament, Greeks were worshiping on Sabbath as well, and Paul was persuading them all about Jesus as they continued keeping the seventh-day Sabbath. In Acts 17:2 we see Sabbath keeping was still Paul’s own custom even after accepting Jesus.

For more details see “THE SABBATH IN COLOSSIANS 2″ by Andy Nash. He references Ron DuPreez’s book, Judging the Sabbath: Discovering What Can’t Be Found in Colossians 2:16, which you can buy at Amazon.com. The book is particularly valuable in solving the question of whether or not faithful Sabbath keepers should also keep the feasts today. And here’s an article by Ron Dupreez: “No “rest” for the “Sabbath” of Colossians 2:16: A structural-syntactical- semantic study.”